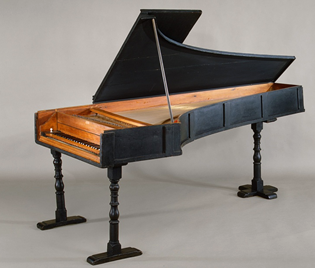 The fortepiano is one  the oldest surviving early  pianos. The artifact remains on display at the Metropolitan Museum of Art in New York. The piano has only 54 keys, while modern pianos have 88. The structure is wing shaped similar to a hapsicord. The piano would produce a different sound,giving musicians more to work with.   The origin and specific date of the piano  remains ambiguous. Historians place its invention between the years of 1698 and 1700. The evolution of the piano stems from pipe organs and early string instruments. The clavicord and  harpsichord were stepping stones to a much more elaborate musical instrument. The inventor of the fortepiano  was Bartolomeo Cristofori an Italian builder of  instruments. During his youth he mostly focused on the construction of key board instruments. The problem with confirming the date of the first piano is that few remain in existence. The oldest ones preserved are from the 1720s. It has been suspected that by 1700 Cristofori had made the first piano.  All over Europe the Scientific Revolution was transforming society. Inventions and technological advancement was also having an impact on the arts. A new invention emerged and music would change as a result.