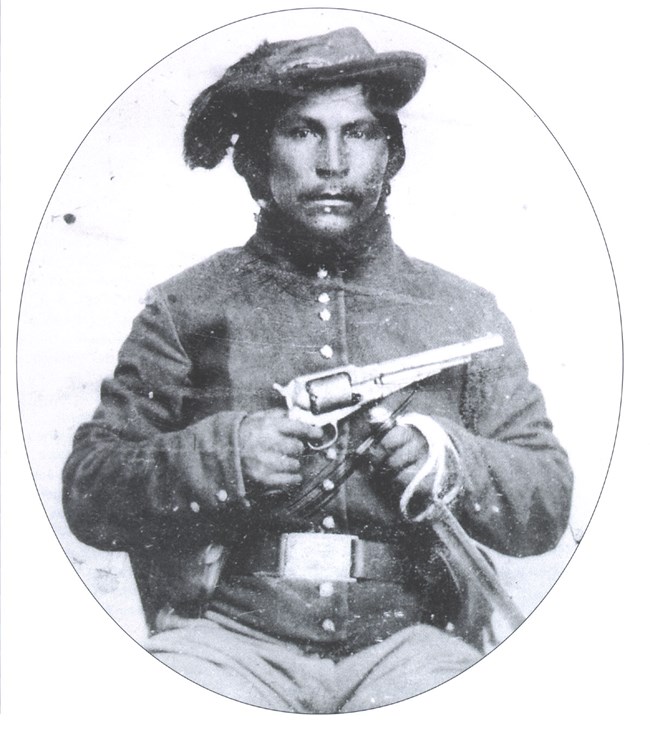 When the American Civil War broke out, Native Americans were impacted. Prior to the national crisis, Indian Americans faced the reality of rapid white invasion and settlement in their lands. Forced removals and broken treaties put Indians in a vulnerable position. Indians were driven from Oklahoma ( Indian Territory) into Kansas by Confederate forces in 1861. Tired of abuse and oppression, they decided to fight back. The displaced tribes would be recruited by the Union Army in the fight against the Confederacy. The refugees would enter military service in three regiments known as the Indian Home Guards. The photograph above is of a soldier who fought in the Indian Home Guard. He is holding what appears to be a revolver with a rotating cylinder with multiple chambers.  The task was to prevent possible Confederate expansion east, which could have changed the course of the war. The Creek, Cherokee, Choctaw, Chickasaw, and Seminole were divided on who they should ally with. This caused the various tribes to go to war with one another. Some Cherokees that fought for the Confederacy would later defect to the Union Army. Native American contribution to the American Civil War  was for a longtime not vigorous studied in US History. The crippling legacy of slavery and Indian genocide continue to haunt the country. Indian Soldiers did not get praise or respect for their military service during their life time, but a growing interest in Native American history keeps their memory alive.